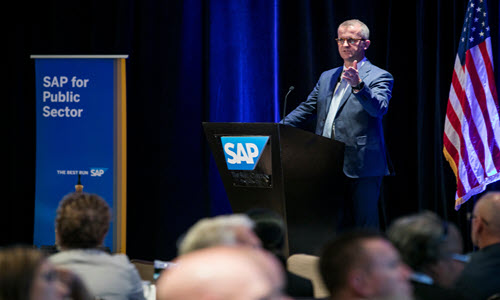 “In the new integrated system, the military has gained traceability and auditability. From the first day of a move until the day of paying for the move, they can track it all in one primary system and have all the information they need—from order to pay.” - Soren Hastrup, Telesto Group

Getting Results through Speed, Change, and Collaboration

Soren Hastrup, Telesto Group CEO, has been at the helm of developing and deploying the new transportation management system (TMS) at USTRANSCOM from the project’s start. He explains how the SaaS by Telesto TMS powered by SAP is “shaking the system” with improved visibility, auditability, and security.

Q: What were your initial thoughts when USTRANSCOM described the type of transportation management system (TMS) the organization needed?

A: Initially, the problem seemed overwhelming and everyone was wondering how we were going to attack it—and provide a complete response. Only a few software solutions had the required capabilities and were scalable to meet the needs of 50,000 users. We started with a powerful commercial solution from SAP and adapted it for the military’s specific needs. From the start, we were confident our strong leadership team could design and develop a transportation management solution that would help simplify a complex process made more challenging by the number of organizations that would become users of the system.

Q: The rapid deployment is incredible. What had to come together to move the TMS prototype so quickly into production?

Sticking with old rules and strategies was not going to help us achieve USTRANSCOM’s goals. Instead of the classic waterfall development approach, we followed an agile development strategy within the confines of DoD requirements. We chose to release a subset of capabilities into the prototype, gather feedback, and make improvements to those capabilities while adding new features and new user organizations simultaneously in future releases. This approach allowed us to deploy more rapidly, similar to what most fast-moving digital enterprises are doing in the private sector. It’s a prototype designed to shake the system and involve everyone in its progress. What we’ve seen is that the agile development GoLive strategy has exceeded everyone’s expectations.

Having a highly secure, cloud-based infrastructure is another major reason we got out of the gate so rapidly. The SAP NS2 and Telesto tech teams did a great job setting the system up so we could have a development environment in 30 days.

Q: What are the three main benefits that the Joint Development and Distribution Enterprise (JDDE) has with the SaaS by Telesto TMS powered by SAP that weren’t available in previous systems?

A: I break the benefits into visibility, auditability, and productivity efficiencies.

A key request was to provide USTRANSCOM with the ability to move units as a single move within the TMS and gain true visibility of the move. Previously each component of the move was handled separately. Now USTRANSCOM has the ability to move complete units across all legs of the journey, and the visibility is incredible. Personnel can see and track movements in real time.

For example, personnel can track a move from Pearl Harbor through the Panama Canal and know exactly when cargo is offloaded and transitioned to land transportation. A commander can see the entire move and know where all the assets are located. In terms of scope, they could be viewing 1,700 pieces of equipment, helicopters, and container ships as they move from one point to another.

Auditability was another necessity for the TMS. In the new integrated system, the military has gained traceability and auditability. From the first day of a move until the day of paying for the move, they can track it all in one primary system and have all the information they need—from order to pay. Achieving that in the legacy systems was an almost impossible task.

Efficiencies and productivity are major gains for the military. In the sustainment move, the Army and Air Force Exchange (AAFES) realized significant time savings. Now they are booking cargo moves in 3 to 4 minutes when in legacy systems it would have taken 15 to 20  minutes. They are much more efficient when they are working on the TMS integrated platform and that translates to cost savings in the millions. For AAFES alone, we are forecasting savings between $5 to $7 million annually when you consider that approximately 30,000 bookings will require less labor to do the thousands of entries necessary for cargo and equipment moves.

Q: When you look at the accomplishments to date, which phase really stands out for you as the gold-star effort?

A: Choosing one is difficult so I’d like to highlight three. First, the quickness of the startup phase was remarkable.  From the first discussion in November 2017 to selection in January 2018 to starting on March 1, 2018 and having the cloud infrastructure ready in 30 days was unbelievable. The government, Telesto, and all the partners were committed and motivated to get moving as fast as possible.

The second highlight was the transition from waterfall to agile. Our group’s ability to sit down and agree to change the program is a testament to our excellent collaboration with the government.

The third highlight is our joint teams’ efforts to roll out 8 functional capabilities to 6 groups while integrating with legacy systems. I’m so proud of our project team and the government user teams who helped design the new system, provided feedback, and those who trained people in Hawaii, Japan, and across the United States.

Q: Describe the unique expertise that Telesto brings to this project.

A: Our key strength is the ability to lead multiple partners in a highly complex project that encompasses many organizations and departments. We were the first in the DoD to successfully enhance and deploy a major enterprise solution as SaaS.

We have been extremely adept at leading and pulling teams together and addressing challenges quickly. Every day we wake up and know we will have to make changes to the program, guiding both process and technology improvements. I’ve been very clear with my staff that what we agreed on yesterday may alter today as we get new information, and that means we can meet schedules with timelines of days and weeks, not months.

We also make the end-user experience a factor in all our decisions. We want to make sure the functions and features of the TMS are not disconnected from the people using the system. Our hard work of seeing the project through the lens of the user has made the overall solution better. The military’s global leadership, carrier partners, soldiers, and everyone who uses the solution can do their jobs better.

What’s next for USTRANSCOM and the SaaS by Telesto TMS powered by SAP?

We are currently finalizing the last deployment of our 24-month contract. We are setting up EDI for the carrier communication and starting to move cargo into Japan, which includes the customs clearance process.

Next, we will be in conversation with USTRANSCOM and others to decide if we will continue the project and further develop the TMS. We look forward to that decision and to continuing this important work.